Creating art through any means necessary.

Music always has been and will continue to be my number one passion throughout my life.  It stirs my soul and makes me feel alive while I listen to and play it on my guitar.  It is the driving force to everything that I do and once I figure out how to pay the bills with it, it will probably consume me entirely.

Of the music that I gravitate towards, The Black Crowes completely dominated that number one spot for about 15-20 years.  The 1990 release of The Black Crowes Shake Your Money Maker blew my f’n mind and became the guide book that I devoured daily trying to get a handle on what I was hearing. It was so, so different from everything else on the radio and at that time and I couldn’t get enough.  It became the only cassette tape I took with me in the car.

These Atlanta, GA natives gave me straight ahead rock and roll in a mostly open G guitar tuning that changed my guitar playing and took it to a different level.  Rich Robinson’s subtle, yet creatively intricate way of building a song is, to this day, a major influence on the way I play and what I look for in new music.  From the very first Open G chord that kicks off “Twice as Hard” to the hidden “Live Too Fast Blues/Mercy, Sweet Moan” that fades in and out at the end of the album, my life was changed. 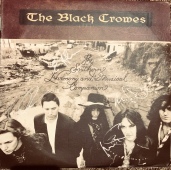 It was a 2 year and 3 month wait until The Southern Harmony and Musical Companion was released and brought me the next piece of the musical puzzle in companion guitarist, Marc Ford.  That album is a textbook of 2 kindred souls playing with their hearts on their sleeves and once again schooled me on what I should be striving for as a player. 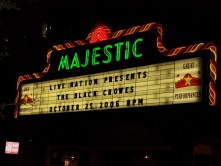 When Marc was no longer in the Crowes…it was a musical heartbreak and left me a little lost.  While the albums after Three Snakes and One Charm didn’t grab me like the early work, I still supported the live shows on numerous occasions.  One show was 5 days after I was married in Hawaii and I made my wife come back a week early to see the Band in San Antonio, TX at the Majestic.  (I wouldn’t bring that up should you ever meet her!! )

While the band was always in top form, I missed hearing Marc and Rich weave a tapestry of “Soul Singing” music that I’d wrap myself in.  I always enjoyed the live shows and intently watched Rich to gather as much mojo as I could from his playing.  The different players that held Marc’s place did a good job but there’s only one Marc F’n Ford!

So where is all this leading?  An opportunity I caught wind of around June 2016 about an opportunity to see Rich record his next album in Woodstock, NY at Applehead Recording Studio.  And the kicker was that Marc was going to sit in on some of the songs.  My brain exploded and I called my wife at home to discuss the possibility of making it happen.

She saw it as a once in a lifetime opportunity and managed our 7 month old, 3 year old, and a 5 year old by herself while I flew out Saturday morning and back Monday morning in time for work.  It was a tight schedule and I had some emails back and forth with Michael Birnbaum, co-owner of Applehead, about my schedule.  I wanted to make sure I could get in once things kicked off.

Michael was extremely accommodating and said to just check in with the on hand staff and they would get me taken care of when I arrived.  My 5:45 am flight put me in Albany at 1:27 pm and with a 60 mile drive to the studio and about 3 hours of sleep, I couldn’t drink enough caffeine

or drive fast enough.  I dumped all my stuff at the hotel on the way, grabbed some vinyl I’d brought to have signed, just in case, and headed off to Applehead.

I parked in the field out in front of the studio and was greeted by Jeff.  I explained everything and Jeff got me right in and set me up with a VIP bracelet and ushered into the control room where my brain caught fire.  I was finally seeing Rich, Marc, Sven, Eddie,  from the old days with the addition of Joe Magistro, Nico Bereciartua, Matt Slocum, Daniella Cotton, and Adrien Reju.  This was amazing.

On the first break, I wandered the grounds and started chatting with Eddie Harsch.  I asked him about his time with Muddy Waters and he told me that he had once bought the legendary blues man a bowl of Clam Chowder because he felt Muddy wasn’t eating enough.  He said he didn’t have any idea why he did it but it seemed like the right thing to do at the time.

He graciously signed my copy of Southern Harmony and Musical Companion and laughed because while he played on the album, he wasn’t on the cover.  He said that he was in the trunk of one of the vehicles in the background. I laughed and told him I appreciated all the music he made over the years and that I wouldn’t take up too much of his time while others were waiting to talk to him.  He said his signature “alright then” and moved on.  Eddie passed 76 days later on November 4, 2016 and I’ll be forever grateful that I was able to see him work his craft in person.

Marc was also out and I hopped in line in front of an amazing couple, Erin and CJ.  Erin White took the pictures you see here and you can see that she captured the joy of it all.  Erin and CJ have since become great friends and we keep in touch weekly on various social media.

I contributed to his kickstarter for the new album, The Vulture, and was anxious to hear it.  Marc was extremely humble and appreciative of the support and also happy to sign a couple autographs.

Sunday kicked off with more fantastic performances and an amazing Q & A with Andy Aledort.  He led Rich and Marc through a very organic chat about everything I was curious about as a fan.  It likely could have taken an extra 4-5 hours to get everything out that he wanted but the recording needed to continue and he retired back to the control room where I was hanging out.

It was somewhat empty in the control room and Andy was conversing with Michael about the guitar you see in the picture.  When there was a break in their conversation, I thanked Andy for the questions he asked and told him I really enjoyed where it went.  We talked guitars for a bit and I asked for a picture. He graciously obliged.

Appleheads Woodstock sessions do a great job of offering a one of a kind experience and one of those perks was a T Shirt that would end up getting me my favorite experience from the entire weekend.  I ended up with the wrong size and Michael said to hang out and he’d get me the right one after the session was finished.  Once the last notes rang out and all the guys retired to the back room, Michael waived me to follow him while he looked for it.

Finally, I had an opportunity to get Rich’s attention and ask him to sign a piece of vinyl and get a picture.  He said of course and when I asked if I could get Marc in as well he said “Ask Marc if he’s ok with it”.  Marc said sure and stepped over to where Rich and I were.  Nico was standing there and took my phone and said that he’d take the picture for me. If I’d been one cloud under cloud 9, I’d have taken a picture with Nico as well but I wasn’t thinking clearly. (Next time I won’t miss my opportunity)

I don’t often get “star struck” but, these 2 gentleman have been the bedrock of the last 28 years of my musical evolution.   These guys defined what guitar playing was for me in the same way that Duane Allmanand Dickey Betts, Keith Richards and Mick Taylor, or Flatt and Scruggs do, but I grew up with their playing and then had the opportunity to meet these guys and see them work in person.  An amazing experience I’ll never forget.