One of the many aspects that I love about being a guitar player and lover of the instrument, is the crazy variety of styles, materials, and designs that go into […]

One of the many aspects that I love about being a guitar player and lover of the instrument, is the crazy variety of styles, materials, and designs that go into the instruments.  From acoustics that take into account not only the wood, but the way they are braced and glued, to the almighty electric guitars that may be all wood, lucite, or some variety of metal.

One very unique builder and designer that has caught my eye is Stephen McSwain and his incredible, hand made, electric guitars.  The thing that originally caught my eye was, well… everything.  The more that you look at the guitars, the more you see the intricate details that Stephen puts into each work of art.  The metal pieces may be a bolt, a shell casing, or even a custom, wax molded skull he crafted by hand.

Stephen started out making his instruments out of a shop in LA but is now in Portland, Oregon and  where I caught up with him on the phone about his guitars and how he builds them.

Stephen was lucky enough to have grown up in an artistic and musical home.  He says that he had to taper off that side of himself until after college but once he finished and ended up back in his home town, he pulled out his carving tools, and created a very unique, carved designed guitar.  At one fateful guitar show, long time buddy and business partner, Steve Hall, overheard and memorized a phone number that resulted in that guitar ended up in the hands of guitar legend, Steve Vai. (See it Here)

Instead of continuing to modify existing guitar bodies, Stephen picked up more tools and taught himself how to create the visions he had in his head.  He attended every concert that came through Charlotte, got himself back stage, and started up relationships with everyone from Prince to Aerosmith.  Those connections were the beginnings of McSwain guitars but, his hard work and acute attention to details is what makes his instruments so damn desirable.

Stephen was working a full time job while hustling guitar building on the side.  He would attended any and all guitar shows and at one life changing NAMM show, he picked up an order from a  Japanese company for 10 instruments.  That order exceeded his  yearly salary at the steel company, and while it was a heavy decision to make, he decided to follow his heart and go all in. 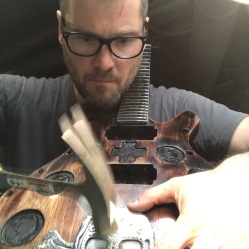 One of the interesting design aspects of a McSwain guitar is the aluminum bound neck.  While it would originally take him a full day to cut, mold, and attach the aluminum binding to the neck by hand, he came up with an open ended channel design that is “screwed and glued to the neck and then the fret board is glued into it.” Stephen explains.  “It’s cool because it adds a ton of resonance to the neck.  It looks so cool and clean when you have the mirror metal binding and I’d just never seen that before and it’s just a really interesting thing.”

I was curious the pick up configuration and his use of a split coil set up.  Stephen explains that “Unless someone requests otherwise, that’s the standard… it’s such a versatile set up because you get the 2 single coils or the one single coil and humbucker, it’s a very cool feature in a really simple guitar.  And it’s not that classic Strat sound due to the fact that I use mahogany.  I mean if someone wants that, you definitely need a Strat but if you want to dive into that territory, it’s there in that guitar.”

I wanted to know about another of the amazing details and asked about the wax moldings that I had seen him post on social media. It’s a pain staking process and while he could simply order up some knobs and accent pieces, Stephen is hands on for all the carefully thought out additions to each guitar.

Stephen explains, “Another One of my really good friends was the impetus of me moving my family up to Oregon is an artist and Jeweler named Ryk Maverick and has a company called Starlingear… we had done a bunch of projects together …and I learned how to do wax work.  I have my own set up…I’ll shoot the wax, send it down to my casting guy in California and he’ll cast up whatever it is that I have.”

With most of his creations being so unique I was curious about the base material for the guitar builds.  Stephen says that “The Tele style we call the Model T is an ash body and maple neck.  Almost all of my other guitars are African mahogany… UNLESS… I find some unique wood like a crazy old haunted pirate ship to make something custom out of.”

Another unique detail about his instruments is that he offers a wall mount that is a perfect match with the instrument.  They are manufactured at the same time to keep the finish and fit consistent and a stunning piece of playable art.

“One of the things that we just did, and I fought it forever, and my business partner and I decided to do it is we just did a Telecaster style.  That shape is not patented any more and… one of the things that were doing is a free standing wall mount that you can hang any telecaster on.  Were getting ready to offer those pretty soon..and that opens another whole market. (They are currently taking pre-orders on the site now)

At one point in our conversation I told him that I loved looking at the instruments and found my self continually zooming in to find more and more details I didn’t see at first.

He says, with what I can picture as a proud smile, “I want you to stand 10-15 feet back and say, that looks really cool, and the closer and closer you get you are finding all this really cool detail.” 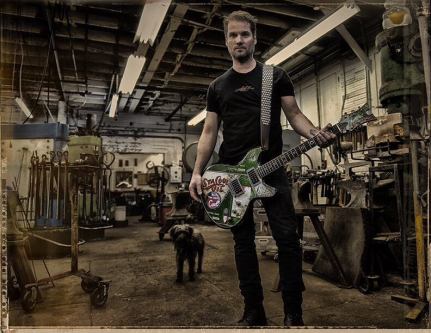 In Oscar Wilde’s 1889 essay, The Decay of Lying he writes “Life imitates Art far more than Art imitates Life”.  Well, in Stephens case, I believe that his art imitates his life.  He’s literally ground, bent, hammered, and forged his way into a builder of amazing instruments that reflect both his artistic eye for detail, and the dirt on his hands.

Should you need a really unique guitar or just love one of his “standard production” units, McSwain is available at his website or via social media.

Father of 3 beautiful girls and one awesome boy. Husband to a Nicaraguan-born wife who constantly makes life an adventure. Currently unfettered from the shackles of a traditional 9-5 and making the most of it.