I began this article around 2010/2011 and struggled to get enough information to be able to present the whole story.  Bits of information here and there from the internet, many Ebay purchases of old Muscle Builder/Power Magazine, talking to family and friends, and I’m still filling in gaps.  At some point you just have to run with what you have in order to get the story out.  Here’s a piece of the story of an Iowa gymnast that left the cornfields for the muscle beaches of California and for a while, made some of his dreams come true.

Denny Gable was a naturally gifted athlete and excelled in gymnastics.  A Gazette article about Denny from 1985 states “Denny Gable was the 1969 Iowa high school state gymnastics all around champion and led Cedar Rapids Jefferson to a second place finish.  Gable won the high bar, parallel bars, and ring events in addition to the all-around. In his junior season, he captured his first state title in the high bar.”

He graduated from Jefferson High School and attended UNI in order to continue his gymnastics but, bodybuilding took hold and set him on a different path.  That same Gazette article says that “In the summer of 1973, Gable and friend Paul Gaeta of Iowa City, drove non stop from Iowa to California, arriving at the legendary Golds Gym at 6 a.m.”    They signed up for 3 months and from here things really heat up for Denny and the dream started to materialize.

He became a fixture at Golds Gym Venice and while I haven’t been able to decipher what he did for work, rumors from Cedar Rapids locals who knew Denny say that he slept at the gym until he got himself on his feet. Being the early 70’s and the fact that the original Golds Gym at 1006 Pacific Ave was Arnold Schwarzenegger’s home gym, I can imagine Denny not wanting to get too far away from that wonderful building.  Arnold was, after all, the reason Denny took that leap and went to California in the first place and the precipice for everything that followed.

September 1975’s Muscle Builder/Power Magazine was Denny’s one cover shot and includes a detailed interview with legendary writer and bodybuilder, Armand Tanny.  In the article Armand writes “Arnold is merciless.  He doesn’t spare others because he doesn’t spare himself.  He has burned out 25 training partners in the past 5 years…At first, thundering along on Arnold’s schedule, he was understandably shaky.  Arnold is dispassionate, doesn’t deviate from his routine, doesn’t become sadistic with new-comers.  Denny asked if he could train along with him, and it happened at the time that Arnold had run out of partners.  He rode through one pain barrier after another.  The “Oak” anticipated a breakdown, and  when Denny failed to sink under the load, Arnold Embraced him with renewed interest.”

Around the same time Denny was becoming entrenched in the lifestyle,  2 ambitious gentlemen decided to write a book about this incredible subculture of bodybuilding, and in essence, change the world.  The book, a true Bible for bodybuilders, power lifters, and meatheads the world over, is the 1974 Charles Gaines and George Butlers authored, Pumping Iron, The Art and Sport of Bodybuilding.  It was not only the jumping off point for Arnold as he prepared for the 1973 Mr. Olympia contest in NY, but planted the seeds for the subsequent 1976 film, Pumping Iron.

That September 1975’s Muscle Builder Magazine stated that for Denny’s first show, the 1974 Mr. America, he won the best poser award over guys like Ed Giuliani and Bill Howard.  His second show, the April 1975 Mr. Western America, Denny won the overall.  Hours in the gym training with Arnold had jumped him from 190 to 210lbs and added 1-1/2″ in the first 3 month, and those gains and progress continued.

July 19th 1975 Mr. American Denny placed 3rd under Dave DuPre and Steve Davis.  Gene Mozee says that “Denny had beaten DuPre in April when he won the Mr. Western America title, but Dave was much improved for the show. Also Denny lost his edge when he spent 8 days in Alabama on the Stay Hungry film.  (The photos from that show featured in January 1976 Muscle Builder/Power are below. One interesting note is the magazine shows a film crew back stage and I located one still from that video.  Where is all this footage of these shows?)

Thursday September 25th 1975 A.A.B.A USA Bodybuilding Championships took place in New York where Denny won the Mr. USA and took 1st place over Joe Nazzario, Len Archambault, Dave DuPre, and Bary Blenis.  He also was awarded the best poser and Most Muscular.  Gene Mozee writes in the Muscle Builder Vol 17 from Feb 1976, “The spectators applauded Denny’s every move and there was a large contingent in the audience that thought he should have had the overall win instead of (Danny)Padilla.”  Incredibly I have the April 1976 Muscle Builder & Power with several of the photographs by Jimmy Caruso, which are shown below. 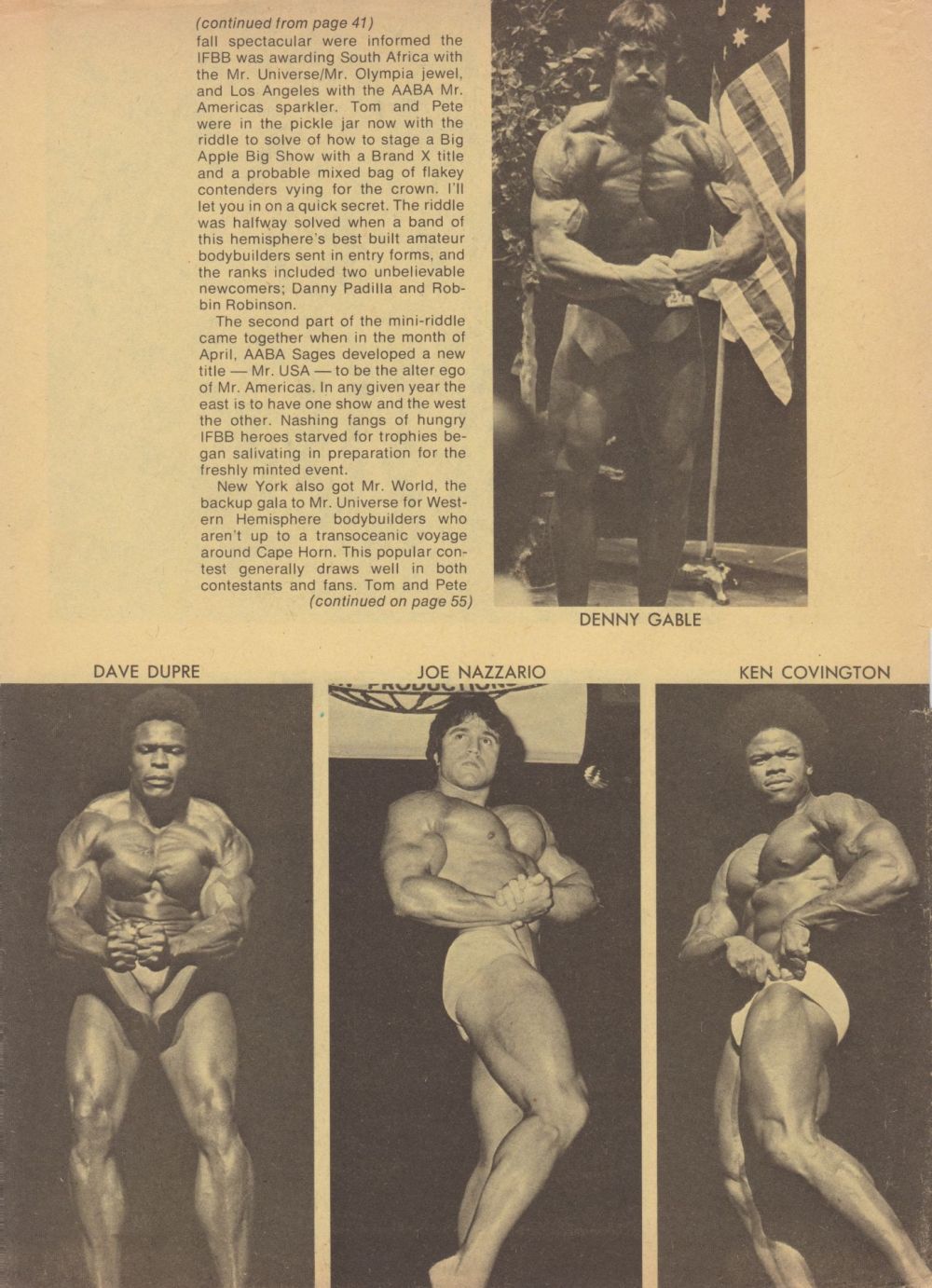 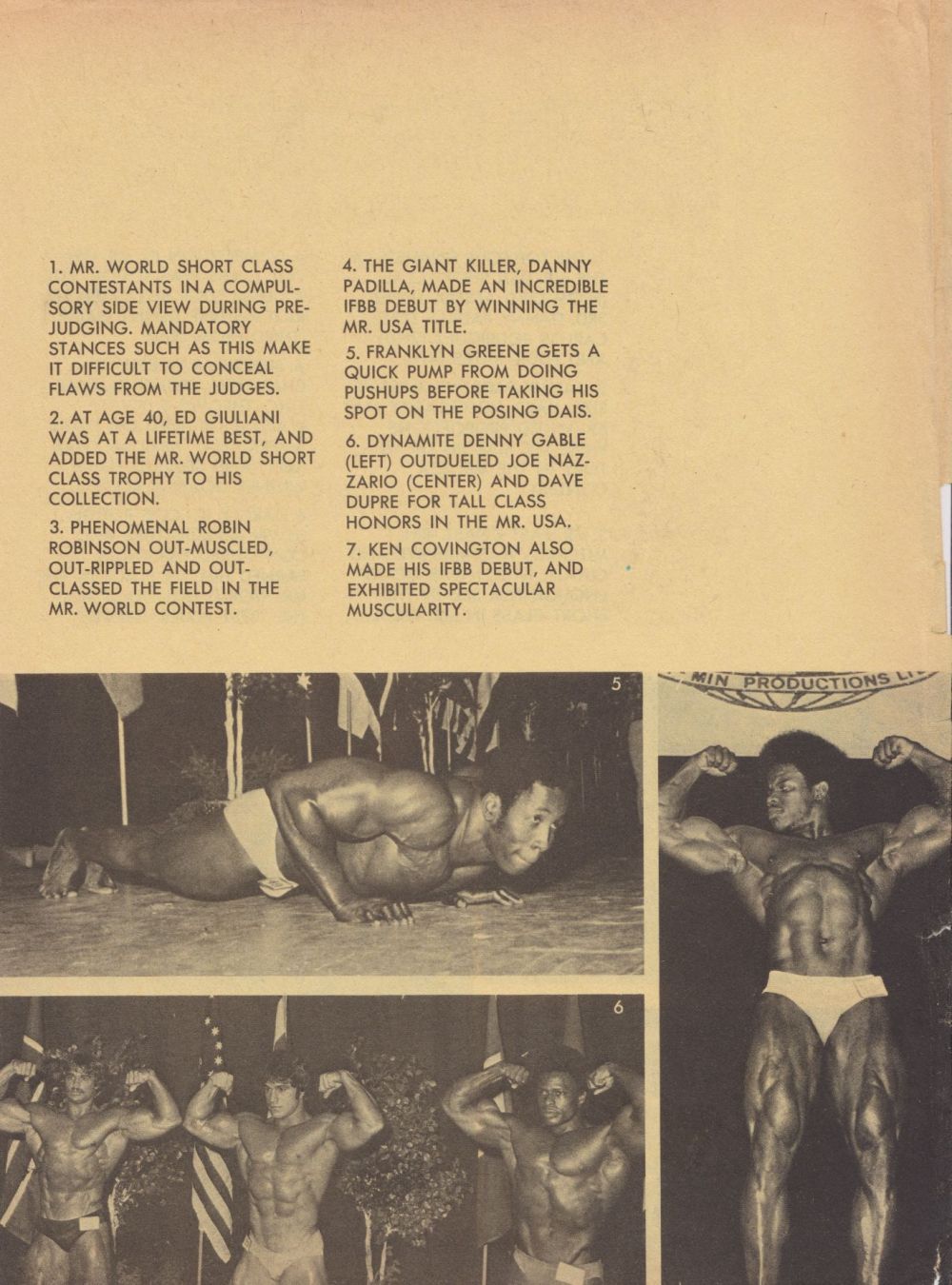 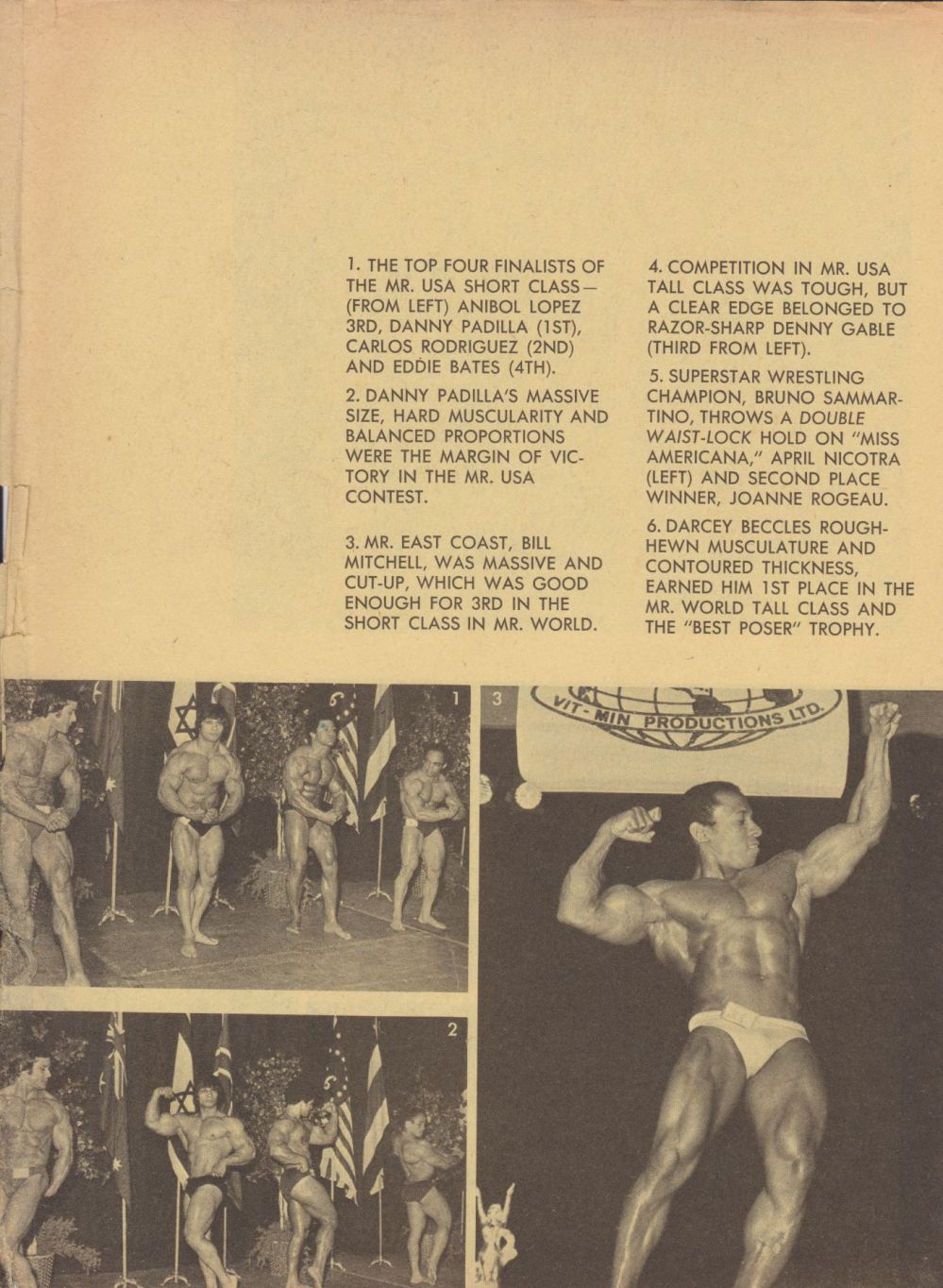 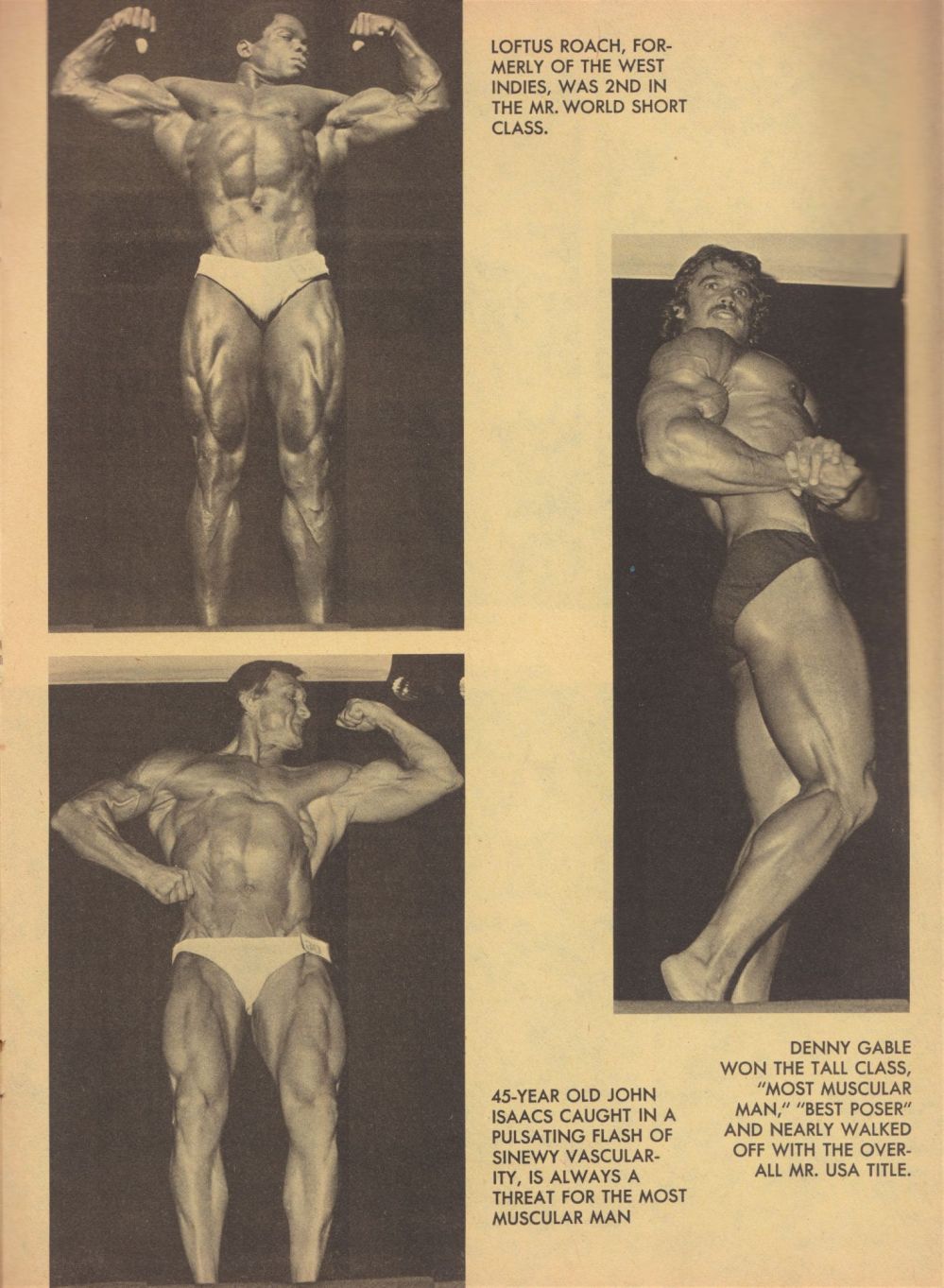 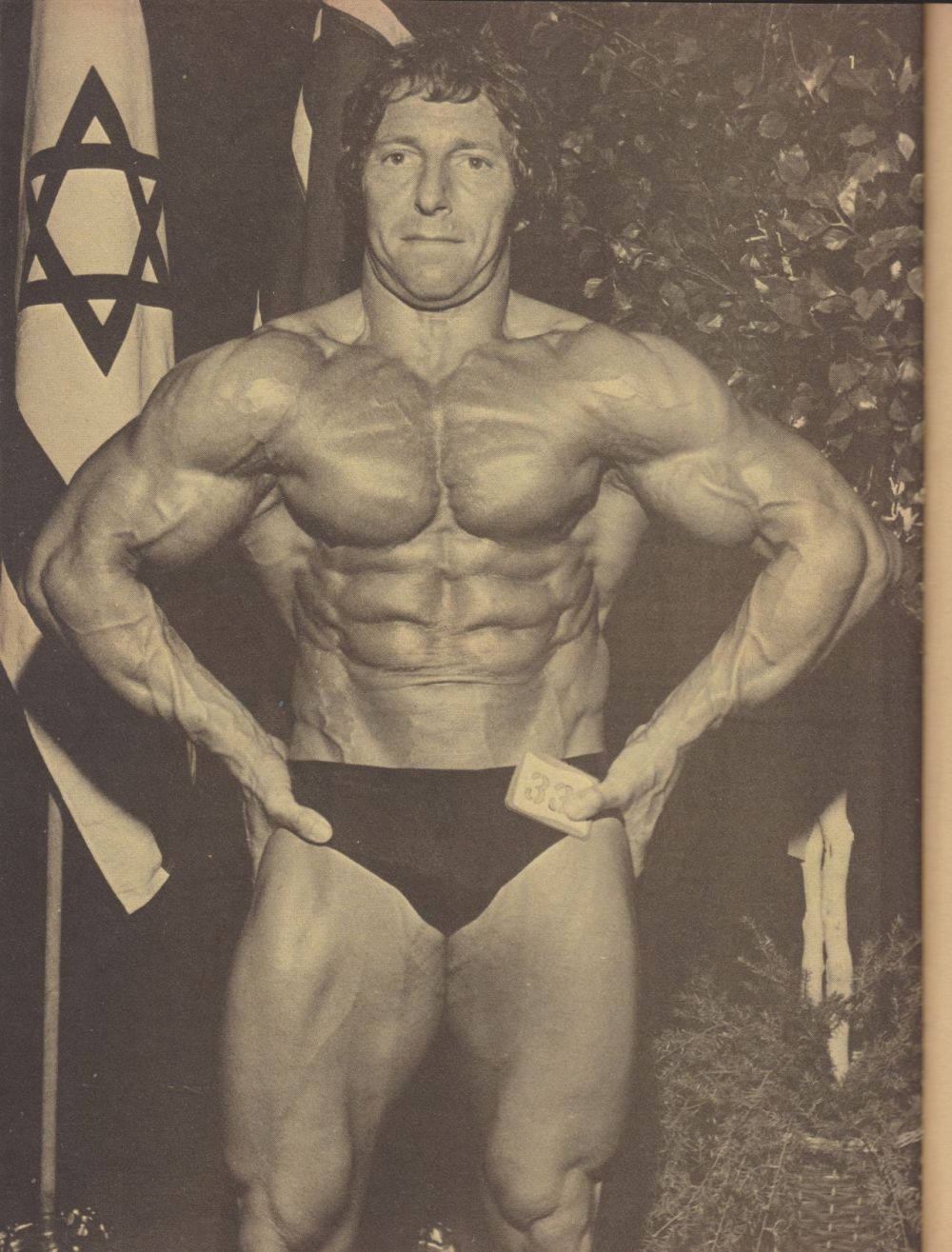 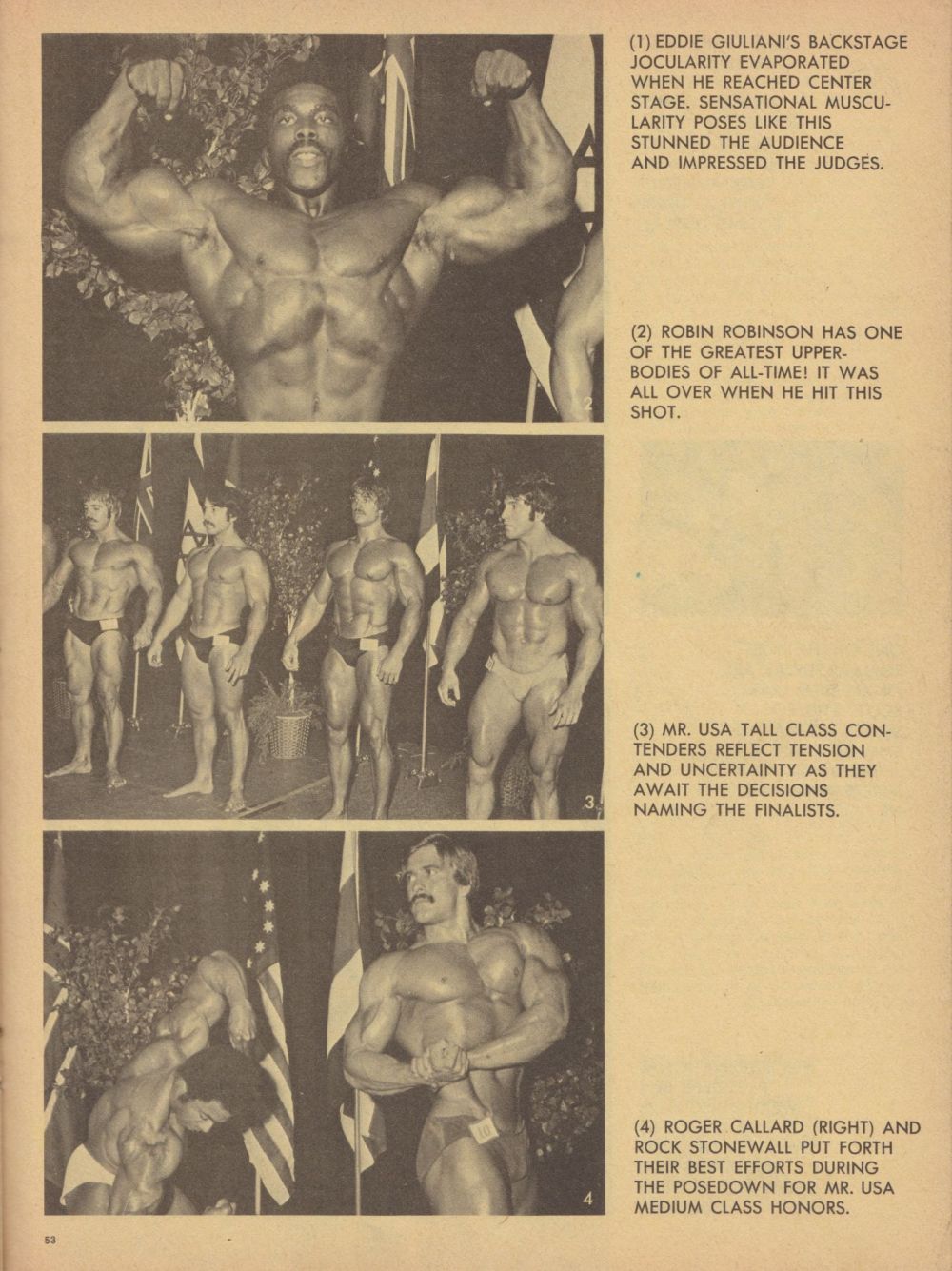 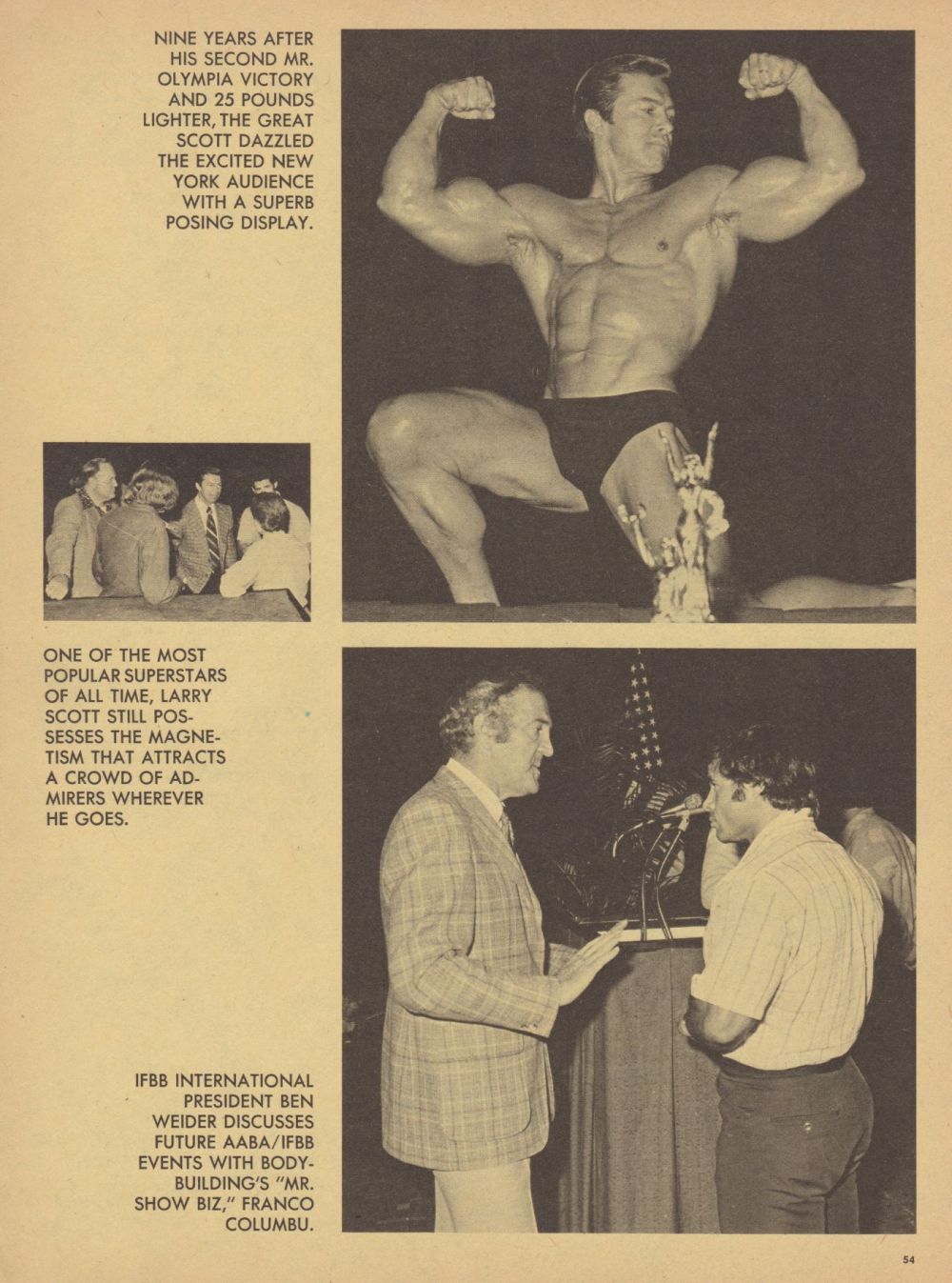 Besides Arnold’s life long friend Franco Columbu, Denny was the longest lasting, consistent partner that Arnold ever had. He began training in 1973 and according to  Robby Robinson’s book, The Black Prince, My Life in Bodybuilding: Muscle vs Hustle, Robby states that Denny was still training with Arnold when he came on the scene in 1975. That’s 2 solid years and 2 Mr. Olympia contests that Denny worked with the best in the game at the time.

By the time filming begins for Pumping Iron, Denny has been a Weider athlete for a couple years and he and Robby Robinson are now training partners.  They show up at the 6:00 minute mark in the opening scenes of Pumping Iron as well as a few other small spots through out the film.  During this time Denny and Robby are also featured in a four magazine article series in Muscle Builder about their training regiments.

After Pumping Iron, Denny went the way of many Bodybuilders during that time and did some acting in a variety of movies including appearances in Stay Hungry, Streets of San Francisco, Sextette, and Mistress of the Apes.  (I couldn’t find much out about his time after about 1977 and more digging may be updated later.)

According to Robby’s book “Hustle vs Muscle, this is around the time that things went south for himself and Gable. Robby says that everything started to go bad for the duo when they walked out on a pre-Pumping Iron movie meeting over money that several bodybuilders were promised and never paid.  In the previously mentioned 1985 article written in the Cedar Rapids Gazette, Denny says the same thing and stated that he quit because of contract disputes and people were not getting paid.  Denny returned to Iowa in the Winter of 1984.

What I consider the best age of bodybuilding was over and Denny returned to Iowa and worked as a trainer at a few different gyms.  He also taught in the Cedar Rapids school system before passing away on July 22, 2000.   Denny died of a pulmonary embolism and is buried with his parents in Cedar Memorial in Cedar Rapids, Iowa.

In 2011 I messaged/emailed a number of individuals including Roger Callard who said he and Denny would often relax after training sessions at his apartment, listening to Carlos Santana and that he was gone he would never be forgotten. Joe Nazario, who competed against Denny, and legendary bodybuilding photographer Bill Dobbins both said he was a great bodybuilder and very well liked in the sport.

He replied back granting the use of the photos from the book and that he always liked Denny and was sorry that he was gone.  The photos I chose are marked as such, in addition to one other photo that Mr Butler must have given to Denny, as it was among the piles of photographs lent to me by Karen and Gary.

2012 I went to the Arnold classic with the intention to find as many old school bodybuilders as I could and ask about Denny.  Mr. Frank Zane agreed to answer some questions but his best recollection was that he trained in the same gym sometimes.  I had better success with Mr. Ed Corney whose eyes lit up and said he (Denny) was a beautiful man, had a great physique, and always did well with the ladies.  He laughed and wished me good luck before asking if I wanted to take a picture with him, which I gratefully accepted.

Bud Pearson, who was Denny’s closest friend through out his time in California and after he returned back to Iowa said Denny was the sweetest guy in the world, until you pissed him off.  To this day he laments Denny’s passing and, had his storage locker not be raided, there would have been more photos and memories of their friendship.  I’m due to get a hold of Bud and may have some more info to share once that happens.

I’ve taken every step possible to document the people I talked to and credit the photographers and sources where I can.  If I missed one, let me know and I’ll be happy to give credit where credit is due.