Creating art through any means necessary.

A few years ago I was in a store when the, generally droning, overhead music stopped me in my tracks and caused me to grab my phone in an attempt to capture the music I heard and track down the artist.  It was beautiful, but raw, and the lyrics grabbed my attention and wouldn’t let go. The song was “Anywhere” from Todd Thibaud’s  album Little Mystery, and it was a game changer for me.

The opening verse is “I feel like I’m an acrobat, I work the wire act and I walk it nice and tall.  I wave down to the friendly crowd they’re screaming nice and loud I think they’re hoping for a fall.” It was so poignant and interesting that I had to find a quiet spot in the store to hear the rest of the lyrics.  The last verse continues the narrative , “Somewhere between suicide and total bliss I called for providence and I asked her for a ride.  She found me on the interstate with a final twist of fate I watched her drive right by”

Those lyrics and Todd’s music had been on constant rotation in my playlist since that day and I recently decided to go to his website and grab some more.  As luck would have it, I received back an email directly from Todd and I thought I’d take my shot and ask for some of his time to discuss his music and career.  He’s as gracious a person as he is a great songwriter and we spent some time on the phone discussing his beginnings as a musician, his career, and what he’s working on now.

JG: What got you started down the musician road and who were your influences?

TT: I tried to start young, I was kind of obsessed with music even as a little kid.  The story goes that my kindergarten teacher told my mom I was going to be a musician someday. I don’t know what I was doing..I think i was just singing a lot, kind of like just obsessed with music and learning songs off the radio, just memorizing the words and that lead me to really want to play guitar.

I think when I was 8 years old my parents got me an acoustic guitar and put me in a group lesson and I just hated it…I just want to make that cool sound and I can’t make it yet.  I tried playing drums at one point and when I was around 12 or 13, I had 2 good buddies that were into guitar, and both had nice guitars, and I coaxed my parents into getting me another guitar and trying it again.  It was like a Martin knock off, I still have it..it was like an OM style and a pretty nice guitar made by this Japanese company.  I just grabbed that guitar and annoyed my 2 friends to teach me guitar and kind of went from there.  Once I learned a bunch of chords I realized that I could learn some of the songs I loved, that was the major motivating factor to learn the music I was hearing, pretty satisfying when you can work out part of it or all of it.

I grew up in the 70’s and by that time I was listening to everything on the radio.  My mom was a music lover and had a box of’s 45’s from the 50’s and early 60’s that she gave to me, which I still have, and there was all this great music in it you know.  The Beatles  singles, The Rolling stones, Little Richard, Johnny Cash, you know just all kinds of great 45’s and I just kind of devoured all that music.  And I think to this day that it gave me my foundation for sort of my obsession for song writing and structure and all that, those songs were just so awesome and perfect.

During my formative years I was listening to everyone from Black Sabbath, to Bob Dylan, to Aerosmith.  I listened to a lot of variety across the board, southern rock was big so Lynyrd Skynyrd, Marshal Tucker, and then even I really liked the singer songwriter people I liked James Taylor and I really liked what Gordon Lightfoot was doing. So it was all over the place but definitely a fan of the harder genre, it was great as a young guy.”

JG:  Were The Courage Brothers the first major band?

TT: I guess leading up to The Courage Brothers, I had an assortment of groups that I played, some solo and some with bands, and were mainly a combination of doing cover material and originals and mixing it up to see what works.  The Courage Brothers was really  the first thing that had some legs to it and got labels interested and we got on the radio.  We were able to tour for a number of years and make it over to Ireland and the UK.  That’s what really kicked things of for me professionally. 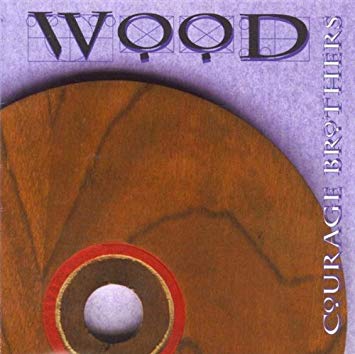 JG: After 2 albums with The Courage Brothers, “Something Strong” and “Wood”, what drove the decision to go out on your own?

TT: Yeah, in my experience there’s always a story. Interestingly The Courage Brothers were formed around me and an old musician friend of mine, it was really the two of us and we formed the band around this writing project. Jim Wooster was one of the 2 guys that I bugged about teaching me guitar back in Vermont, I’ve known Jim since I was 10 or 11…  To answer your question you know, we had a pretty good run together but ultimately..from my perspective..I think the whole time I was in The Courage Brothers I think I was figure out who I was as a song writer, and what was really driving me.

For me that experience was almost like going to school…I think one of the things that a writer has to do is find your own voice and for me those 4-5 years with The Courage Brothers really lead me to where I felt comfortable and ultimately that’s where the problems began.  Because I felt pulled in a certain direction and I think Jim felt pulled in a different direction and we tried to make it work but ultimately it just couldn’t survive it.

JG: What was the process like going into the studio doing what you want to do?  Was it liberating or somewhat daunting because, now it’s all on you?

TT: It was absolutely both of those things Jeremy.  It was certainly scary and you know,  you can imagine a band breaking up and there’s bad feelings sometimes and Jimmy and I, thank goodness we reconciled everything and our friendship is intact now, but there was a while where things were really tough.  You make a stand like that and go through that process and you come out of that and all the sudden you’re on your own and you go, OK, well, I better do something now I don’t what to look like an idiot.

There was a label that was interested in what we were doing in The Courage brothers and stay interested as I went solo, it was Relativity Records..they had built a new staff..and my A&R person, Susan Dodes, was great and  was like,  There’s another guy you should get to know and has been through a lot of this.  His name is Kevin Salem and he was in a band called Dump Truck and has  a bunch of great records of his own.  Kevin kind of took me under his wing and he really helped me shape, gave me confidence in my songwriting and  helped me shape what could be the next step what could be the next step.

That next step ended up throwing Todd into a weird situation where he wanted Kevin to produce but the label was pushing for a different direction and had scheduled the start date for January 96.  Using Todd’s own lyrics, “a simple twist of fate” occurred and just after Christmas, Sony fired everybody at the label, leaving the artists up in the air and playing showcases to try and get another deal.  Todd’s lawyer got him out of the deal, negotiated a release, and Todd ended up with enough money to, at Kevin’s  insistence, make his record.  Eventually it ended up on Doolittle records (now New West Records) and Favorite Waste of Time made the light of day in 1997.

Todd’s put out 10 more solo albums since Favorite Waste of Time, 2 Collaborations with Joseph Parsons, an album with Sean Staples, an album with Hardpan, and a beautiful collaboration with Kim Taylor on the album Water and Sand.  He’s been continually playing regional shows around Boston and is currently finishing up the next album.

That new album, Hill West, should be out in April and there is an Indiegogo campaign going on for the next 33 days to help get it funded.  It’s 85% of the way there, as of the publishing date of this article, and with just a few more backers, it will reach that goal long before the deadline.  I asked if he could give a little hint on how this album was taking shape and what direction it was going.

TT: It’s going to be a much different record.  The record I’m going to make is going to to be really stripped down and it’s just something I’ve never really done for my own material.  I hate to call it a solo record, I mean like a really solo acoustic, I want to use the guys in a different way than I would preform the songs live.

As if this all wasn’t enough interesting stuff happening, March 29th,  The Courage Brothers will be reuniting at The Burren Backroom in Summerville, Ma.  As I wasn’t aware of their reunions when we spoke originally, I messaged him to see what he could tell me.

TT: This will be our third Courage Brothers reunion. I think it was our bass player, Mike Rivard who started the original conversation about six years ago and opened up the door. Since then we’ve done one every couple of years. It’s been great to revisit those songs, and play together as a band again after so many years.

In many ways, I think we’re actually a better band now than we were back in the day. Each member has continued with their own musical careers, so we’re coming back together at this point with a lot more experience under our belts. It’s also been great to see the fans again when we do these shows. It’s a nice feeling to know that the music we made together twenty five years ago still holds a special place with our fans, and it means a lot to us that they will still come out and show their support when we play these shows. Each reunion has been pretty special for me and the guys. I know we’re all looking forward to this next one.

Click the link to Anywhere and listen to Todd and Sean Staples preform the song that got me hooked on Todd’s music, or hit the links below for Todd’s main page, and the Indiegogo page to support the upcoming album .  If you are out in the Boston area for one of Todds’s solo shows or can get out to The upcoming Courage Brothers show, it will be a great experience to take in.  As I always say, great music must be supported if you want to keep hearing more and Todd’s music is something I gladly help support.